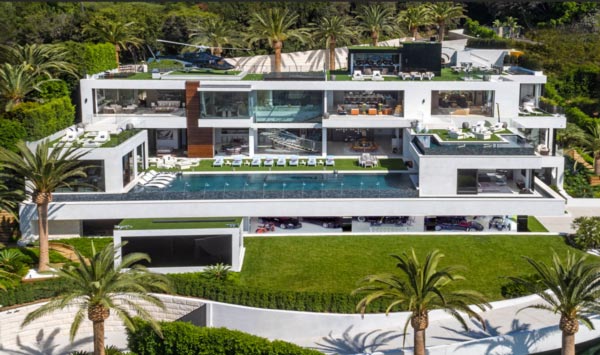 Most Expensive Home in U.S. Wants Toughest Fabric, Not Most Popular

The process of selling a Los Angeles CA home with the highest asking price ever - $250 Million – had the brakes abruptly slammed on it when the outdoor fabric used in 17,000 square feet of outdoor space began to stretch and sag from the recent heavy rains in southern California. What saved the day? Marlen Textiles’ Artic White Top Gun to the rescue!

So what does one get for $250,000,000? To begin with, 38,000 square feet of living space, and the title of the most expensive home for sale in the United States. It includes 12 bedrooms, 21 bathrooms, 3 kitchens, a bowling alley and movie theater. After the heavy rains that have pounded southern California, the mega-mansion contractor realized with horror that the original outdoor fabric was stretching and sagging (ironically a very popular, expensive solution-dyed acrylic). He called a fabric distributor, who just so happened to have attended a recent lunch and learn from by David Saks, the Marlen Textiles Southern California representative. The distributor remembered the excellent properties and characteristics for Top Gun that were demonstrated by David, and when asked by the contractor, “What do you have that won’t stretch or sag, because we can’t use this other fabric anymore,” they recommended Top Gun.

The contractor ordered Top Gun Arctic White replacement fabric to re-do most of the outdoor fabric. And now, the most expensive home for sale in the U.S. has the most durable and high-performing fabric: a happy ending for a tough story and sew-sew beginning.

Go Wide and Save Big with 2-meter Top Gun

Have an application requiring a total material width of greater than 62” but less than 79”? Save money and labor by using one pass of 2-meterTop Gun, instead of 2 passes of standard-width.

It makes great economic sense, because with the wider, 2-meter rolls,  you won’t waste the extra material (for a 78” wide cover you are trimming off 46” of standard Top Gun when you use two passes) or have to spend the labor first cutting and then sewing or welding a seam. Also, for applications requiring a total width of more than 124” but less than 158” the same would hold true as using two passes of 2-meter wide Top Gun, instead of using three passes of standard-width Top Gun. This is a great rule-of-thumb to keep in mind as you pattern your jobs.