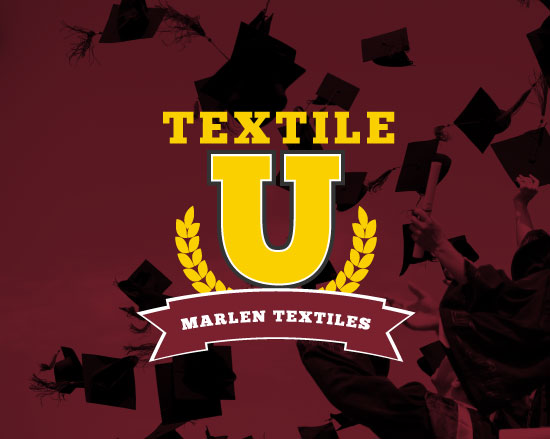 Although no one has much mentioned Spring with the up and down weather lately, it’s still coming . . . as in less than 60 days! And spring means spending more time outside, and that means putting up new awnings, sails or really any type of fabric shade structure. Frequently, these fabrics will need to pass a Flame Retardant Specification or Standard. A lot of Marlen Textiles customers get overwhelmed with the alphanumeric soup of characters contained in these types of specs, and ask us to explain. Hence, our February Textile U newsletter is dedicated to just that: breaking down the confusion and mystery around Flame Retardant specs in order to give you a better understanding of what these specifications are, how a fabric passes them and what some of the specifics are for each test.

There are many different Flame Retardant Specifications used today so it can be confusing to understand the similarities and differences between these standards. The six most common Flame Retardant Specifications are California State Fire Marshall Title 19, NFPA-701, CPAI 84, CAN/ULC-S109, FAA/FAR 25.853, and MVSS-302. Also, it’s important to note that different areas of the country follow different specifications. The State of California (obviously) uses California State Fire Marshall Title 19, while the metropolitan St. Louis area is more concerned with fabrics passing NFPA-701. There are even stories of local Fire Marshalls trying to burn samples of the fabric themselves, regardless of whether one has a certificate for the fabric (i.e. the infamous “Stairwell Burn Test.” Click here to see a visual of this). Wherever you are, always check your local regulations and consult with the local Fire Marshall.

The state of California is a flammability leader in the United States, often having stricter requirements than the rest of the country. Sometimes the California State Fire Marshal certification is recognized and utilized outside of the state of California. But depending on where you live, some local code officials may refuse to accept a certificate from the California Fire Marshal. Knowing how it compares to other specifications will be helpful in this case. The Title 19 small scale test is a vertical flame test that is conducted on ten samples with five samples cut from the warp direction and five from the fill direction.  Fabrics used in outdoor applications are tested in the original state, after soaking in water for 72 hours (leaching) and after 100 hours of accelerated weathering. Three sets of ten fabric samples are flame tested after completing these three preconditioning steps. The flame is applied to each sample for twelve seconds.  The requirements for passing the test are found in table 1.

The National Fire Protection Association is a non-profit organization that developed the 701 standard called Fire Tests for Flame Propagation of Textiles and Films. NFPA 701 is the flammability specification quoted in the International Building Code for such products as canopies. It is also possibly the most widely quoted flammability specification for specialty fabric products in the United States. Test method 1 is intended more for interior products such as curtains and draperies while Test method 2 is designed for outdoor materials such as awnings, tents and tarps. Test method 2 is similar to the CAN/ULC-S109 large flame test. When the fabric is expected to be used outdoors it should be tested in method 2 after soaking in water for 72 hours (leaching). The requirements for passing are found in table 1.

CPAI-84 is a flammability test method written by the Industrial Fabrics Association International for flame-resistant materials used in camping tents. The definition of camping tent is “any portable temporary shelter or structure designed to protect people from the elements” and includes such products as camping tents, play tents, dining flies and canopies, recreational vehicle awnings and ice fishing tents. The CPAI-84 test procedure is very similar to the California State Fire Marshal Title 19 test. Three sets of four samples (2 warp and 2 fill) are tested in a vertical flame test after conditioning according to the standard. Four samples are tested in the original state, four are soaked in water for 72 hours and four are put in an accelerated weathering chamber for 100 hours. The flame is applied for 12 seconds and the time it takes for the flame to extinguish, residual flame time and damaged length is recorded. The requirements for passing the test are found in table 1.

Underwriters Laboratories of Canada is an independent product safety testing and certification organization. CAN/ULC-S109 is a Canadian flammability standard for fabrics and the most important flame specification in Canada for textiles and films. The standard says fabrics shall comply with two tests: the small flame test and the large flame test. The small flame test is very similar to CSFM Title 19, CPAI-84, and FAR 25.853. The large flame test uses a much larger flame and the requirements for passing both tests are found in table 1.

FAR 25.853 is a Federal Aviation Regulation test. It was developed for materials used in aircraft cabin and cargo compartments. There are two tests in this method. One applies the flame for 60 seconds and the other applies the flame for 12 seconds. The 12-second flame test procedure is very similar to the California State Fire Marshal Title 19 and CPAI-84 methods, with slightly different requirements for passing.  These requirements are found in table 1. The 60 second test procedure is slightly more difficult to pass with a maximum allowable char length of six inches and average residual flame time of less than 3 seconds.

This is a flame test developed for automotive interior materials according to Federal Motor Vehicle Safety Standards number 302. It specifies the burn resistance requirements for materials used in the occupant compartments of vehicles. The sample is inserted into two matching U-shaped frames. This test is conducted inside a burn chamber with the sample mounted horizontally. The test measures the rate a sample burns horizontally. If the flame goes out in this test before reaching the start line marked 2 inches from the flame, the sample passes. The maximum rate of burn allowed to pass this test is 4 inches (102 mm) per minute. The flame does not have to extinguish to pass the test as long as it meets the burn rate requirement. More information about this test is found in table 1.

We hope this information will reduce the mystery around Flame Retardant specs and that it will be helpful the next time you are choosing a fabric that needs to meet a Flame Retardant Specification. As always, if you have any questions, please contact Marlen Textiles.